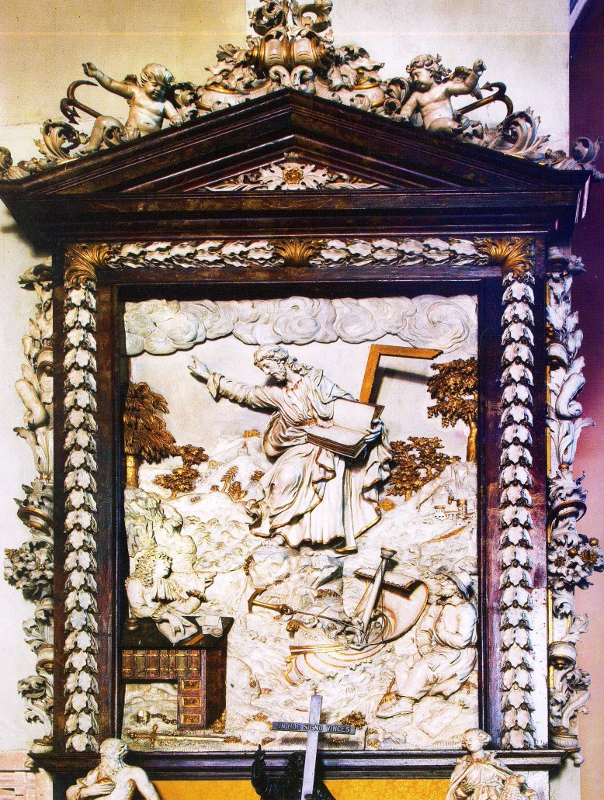 Altar of St. Thomas the Apostle has a rectangular rere-dos with ornamental frame decorated with motifs of laurel leaves, olive branches, beli peppers and daffodils, which sym-bolize the exotic countries in which the saint conducted his missionary activities. In the finial of the altar is a putto and anchors, symbols of hope and exotic missionary journeys of St. Thomas.

St. Thomas was a fisherman from Galilee. After sending the apostles away, he went to Persia and India to preach there. He wanted to gain knowledge and was very inquisitive, pious, faithful and just.

Apocrypha claim that he was to build a palące for the king of Guduphary in India. Therefore, the second attribute of St. Thomas is a bevel. Royal Minister gave Thomas all needed funds for the construction of the palące. The minister depicted in royal costume, wearing a wig, sitting at a cabinet-desk with a shelf of books, points to a letter on the table. The letter is a commission to build the palące. St. Thomas, however, allocated all funds for the cause of the poor.
In the lower part of the retabulum is depicted a beggar with alms who thanks St. Thomas for his support in hour of need. Thomas was martyred in Kalaminie in India. He was killed with a spear at the order of the king. Other legends say that he was imprisoned and beheaded with the sword. At-tributes, sword and handcuffs are placed at the bottom of the altar. Sailing boat on a stormy sea that drops anchor is a ref-erence to the means of transport available to the missionar-ies in the seventeenth century. In the background you can see the lighthouse that shows sailing ships the way. Before St. Thomas, there is depicted a gold palm tree that symbol-izes patience, justice and strong faith. In the finial of the altar is a putto and anchors, symbols of hope and exotic missionary journeys of St. Thomas.

He is the patron saint of India, Portugal, Urbino, Parma, Zamość; architects, carpenters, surveyors, masons, bricklayers, carpenters, marriages and theologians. In art he is presented with the following attributes: carpenters sąuare, the cup, the sword, heart, handcuffs.

The altar is the work of the eminent sculptor Johann Riedel. The altar s decoration is in white and gold tones. It is outstanding in its artistry of execution.