Chapel of Our Lady of Świdnica (Marble) 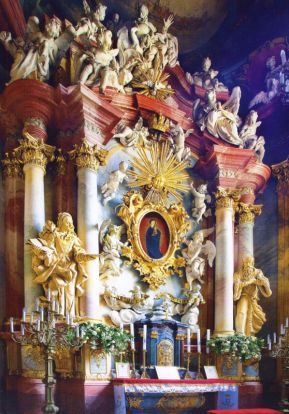 The chapel was founded by the guild of butchers in 1459 years.

The medieval painting of Our Lady of Świdnica, known as Domina in Sole, was placed in the chapel in 1686 by the Jesuits. The overhaul of the chapel took place in the eighteenth century at the initiation of the Jesuits. Also the chapeFs interior decoration was changed as the wondrous painting was placed here.
~ttalian patterns (Treaty Jesuit A. Pozzo S J (1642-1709) were used to create new interior design. The earliest traces of art of Pozza in Silesia can be find precisely in that Jesuit church in Świdnica.

The figurę of Our Lady is surrounded by the radiant glory of gold, hence the name of the painting – Madonna in Sole. In’the seventeenth century, the Countess von Sintzendorf, family name Kinsky, the widów of the alderman of the Duchy of Świdnica and Jawor, founded a silver dress decorated with Stones.
The altar is flanked by two figures representing the parents of Mary: St. Annę and St. Joachim.

Chapel murals datę from 1729 and are work of eminent painter Johann Hiebel Prague (1679-1755). The wali paintings opposite the altar depict Jesus Emmanuel standing with a cross on a transverse linę of the letter «H» – abbreviated name of Jesus, «IHS. In the lower part of the altar, there is an inscription: «In the tabernacle salts posuit suum» (There God put up a tent for the Sun Ps 19.5). The composition is inspired by the artwork of H. Vierix commissioned by the Superior Generał of Jesuits, Aquaviva C. (1615).

Against the background of the sky, Silesian eagle with the inscription «Virgo gloriosa Benedict» (O glorious, blessed). In the corners of the vault are emblems: phoenix with Lemm IN TE MORIMUR – symbol of the Savior who died on the cross and has risen; Noafos ark with Lemma IN CERTA SALUS – symbol of salvation by God; Maria is the hope and intercessor of graces flowing from Christ, and hope for eternal life, pelican feeding young with Lemma: NEC TE SINE VIVIMUS – symbol of Christ who feeds the faithful with his own blood.

On May 8, 2000, Cardinal Henryk Gulbinowicz the Metro-politan Archbishop of Wrocław established the Shrine of Our Lady of Świdnica in the Church of St. Stanislaus and St. Wence-slaus. The miraculous Gothic painting in the chapel will be crowned in 2017. To celebrate that it will receive new silver dress adorned with numerous precious Stones (imperial Jasper, precious coral, stone from the cave of Archangel Michael, mete-orite from the moon, amber). The dress was designed by Mariusz Drapikowski, goldsmith from Gdańsk. Priest Bishop Ignatius Deca decided to spread the devotion to Our Lady of Świdnica to the entire diocese of Świdnica.