The crucifixion of Jesus on Golgotha 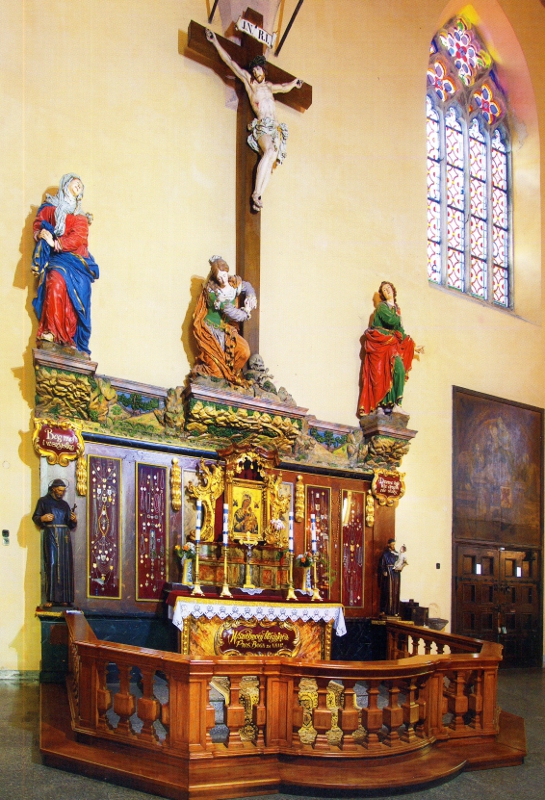 The Cross of Christ is the most important symbol of Chris-tianity. Long was the dispute about the number of nails driven into the Body of Christ on the cross. In accord with the earliest tradition of four nails (Early Christian and Byzantine) Christ had to be presented on the cross with his feet nailed separately, arranged one by one, usually supported on the footrest (suppedaneum). As of the fourteenth century, the feet of the Crucified Christ were depicted superimposed, nailed by just one nail. Jesuits were behind spread of this type of presentation.

Pilate ordered a plaque called “titulus” to be fixed above the Christ’s head – an inscription of his guilt “I.N.R.I” (lesus Nasarenus Rex Iudeorum).

Mystical literaturę, activity of orders, custom pilgrimage to the Holy Land and the development of piety of common peo-ple – all helped to spread the tradition of meditations on the suffering Jesus and contributed to the deepening of devotion to the Passion of Christ. Key to that spread was also the dis-covery of the relics of the Holy Cross in Jerusalem by Saint Helena in the fourth century. Cross relics were handed over to churches and monasteries to commemorate the Passion of Christ. Images of the suffering of Jesus deepened religious experience. They left on sensitive souls a deep mark.

Christ crucified on Golgotha is presented along with biblical participants of this tragic event: the Mother of God and St. John the Evangelist. The Saviour left his testament to them. Our Lady is presented with her head raised toward the sky, torn with pain caused by the suffering of the only Son. The image evokes compassion and guilt for sins for which the Saviour died on the Cross.

When Jesus saw his mother and his disciple standing by, whom he loved, he said to his mother, “Woman, behold your son. Then he said to the disciple: «Behold your Mother.» And from that hour the disciple took her into his home.” Jn 19, 26-27. Mary became the Mother of the Church.

“Christ on the Cross With Mary Magdalenę in tears.” Under the cross kneels grieving Mary Magdalenę – symbol of sinful humanity, conversion and repentance.
In the post- Tridentine era formed a type of narrative con-sisting in dramatic contrasts of light and shadow, the dynam-ics of movement, body language, rhetorical gestures and deep spiritual experience of the drama of Jesus’ death. Baroque art rejects complex apocryphal story lines and motifs from legends. Only biblical message was left in the iconography of the Crucifixion – a message which tells about the great sacri-fice of Christ.

A life-size polychrome sculpture madę by Johann Riedel SJ (1654-1736) in 1704. It is very expressive and foreboding. The artist skillfully incorporated into the work body language and rhetorical gestures. He skillfully depicted various emo-tions – visible in facial expressions. Even robes draped in cas-cading folds amplify the drama of the event. The dramatic scenę is set against a landscape depicted in the lower part ofthecomposition.