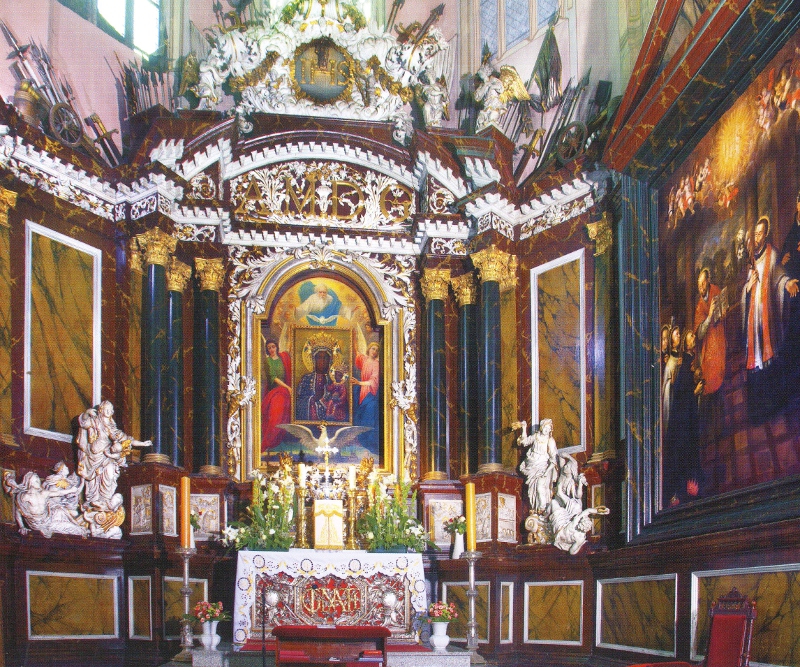 The equipment and fittings of the chapel datę from 1699-1700. They are work of Johann Riedel, prominent sculptor and Jesuit monk, who had worked in Świdnica.

Altarpiece of architectural type is modeled on the design of the altar of St. Ignatius in the church II Gesu in Romę. It has a concave convex form with composite columns set in scenę. It boasts ornate frieze and high plinths with bas-reliefs de-picting the mystical visions of St. Ignatius. The antependium is lavishly decorated with ornamental motifs that surround the inscription “IGNATIUS” (Ignatius). Panoply refers to the original profession of Ignatius of Loyola (he was a soldier). The altarpiece painting depicts the “Vision of the Holy Trin-ity in La Storta” (J. Claessens). St. Ignatius is presented deep in prayer during which he saw the vision of the Trinity and Jesus saying, “I will be merciful to you in Romę” (Ego Vobis Romae propitius ero). Furthermore, he heard God the Father say to Jesus, “I want you to take him for his servant.” St. Ignatius kneels staring at the Divine Persons. On the left at the bottom of the painting is a faint signature of the painter. Above the altar painting is a short motto of Jesuit Order: AMDG. In the finial, you can see a panoply and an abbreviation of the Name Jesus as well as bas- relief of Jesus Emmanuel.

There is another painting in the altarpiece: Our Lady of Częstochowa. It is supported by angels. It was painted by Bolesław Rutkowski (1882-1978). It’s been hanging in the church sińce 1947. Notę a white eagle with a crown as well as images of the most important churches in Poland at the bottom of the painting.

The altar is flanked by sculptures: “The Triumph of Religion over Heresy” and “Triumph of the Catholic faith over idolatry.” The allegory of Heresy – a man with a crutch and a woman with two snakes. Religion drives Heresy out with rods.

Faith is presented as a female figurę with a chalice, cross and angel. She crushes the serpent. At her feet are heathen peoples raising their hands towards her.

The sculptural group that you can see in the chapel of St. Ignatius was inspired by the designs of sculptures madę for the main church ofthe Jesuits in Romę. They datę from 1699 and were created based on the drawings of Pozza from 1695. Also embellishments on the plinths of the altarpiece were inspired by the Jesuit church in Romę.

On the south wali of the chapel there is a painting depict-ing the most important saints of the Jesuit religious family: St. Ignatius of Loyola in his chasuble (book), St. Francis Bor-gia (crown, miter, the skuli) and St. Aloysius Gonzaga (cross) and St. Stanisław Kostka (lily). St. Francis Xavier, the Apostle of India and Japan in surplice (lily) presents three Japanese martyrs: Paul Miki, John de Goto and James Kizai.