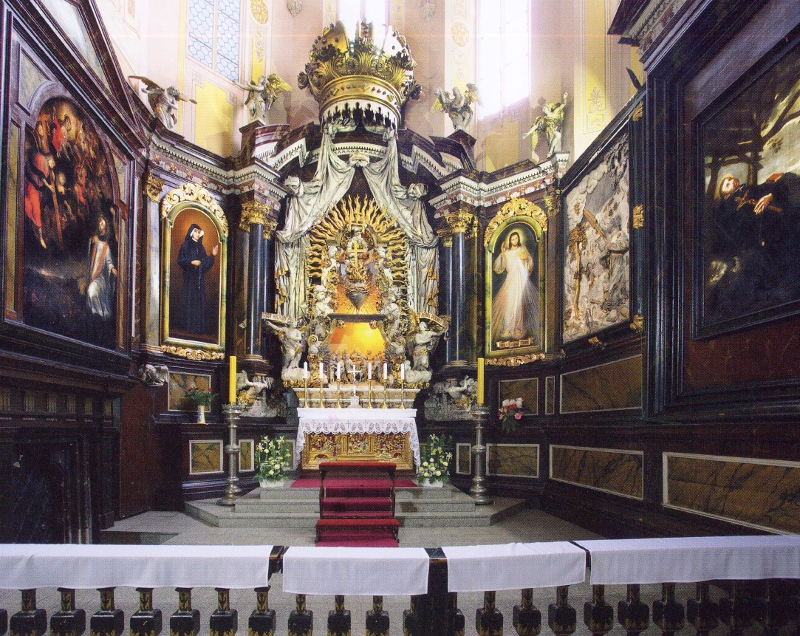 The Jesuits devoted two chapcls adjacent to the sanctuary I to saints who were the most important to the holy Society of Jesus (in accord with the practice of their Roman homel church).

On the south side of the altar, you will find the chapel I of St. Francis Xavier (1506-1552). Sculptural decoration ofl the chapel is the work of Johann Riedel SJ and his workshop. The work was completed in 1703. Two paintings in the chapel represent “Vision of Our Lady surrounded by angels with cross-T es” and “Death of St. Francis Xavier in solitude.” Presumably J. Claessens from Antwerp (1716) is the author of the painting Educated in Italy, active in Silesia from approx. 1692, he wa the court painter of Wrocław Bishop F. L. von Neuburg.

Francis Xavier is one of the pillars of the Society of Jesus. In 1540, at the bequest of Ignatius of Loyola, he traveled to the missions in the Far East. He wanted to preach the word of God to the nations that do not know God. He reached the Portuguese colony in India, the Goa. In his difficult work he adapted to local life and customs of the indigenous.

He was the apostle of India and Japan, the greatest mission-ary of all time. He served as Papai Nuncio in the Far East.

His vast knowledge about natural phenomena, laws of naturę, meteorology fascinated people in the Far East He spent over 10 years on missions (India, Japan, Ceylon Sumatra, Maluku). In 1549, he began missionary activity in Japan. Francis Xavier’ wish was to carry out missions I in China, but he died before that was possible. He was bom I in Spain and died in China at the age of 46. He was buried in India.