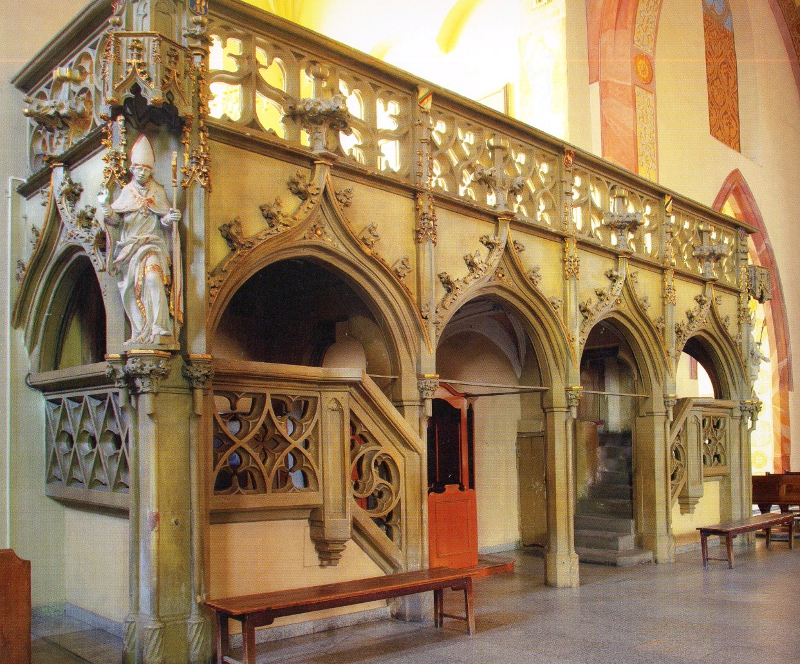 The Bourgeoisie choir dates from around 1,462. It was com-missioned by the Marian Brotherhood active in the parish in Świdnica. The chapel is located above the old sacristy. It boasts a stellar vault with profiled arches. The polychrome of the vault is the work of Josef Langer (1865-1918) and it dates from about 1907. Decoration in stone is the work of mason Kaspar Salomon and master Niklas.

The representatfre entrance to the chapel dates from about 1462. Openwork balustradę madę of sandstone, which separates the chapel from the southern nave, is supported by five pillars with arcades. There are two separate flights of stairs, one to the right and one to the left. Notę Gothic figures of the patrons of the church, St. Stanislaus and St. Wenceslaus on both sides of the railings.

In the arcade arches of the chapel are located bas-reliefs de-picting Gothic Annunciation of the Blessed Virgin Mary and the Veil of Veronica (XV.) Notę also a Gothic polichromy: «St. Anna Samotrzeć and «Maria Amabilis».

The most valuable in the chapel is pentaptych, a winged altar, with the scenę of the Assumption dating from 1492 -the only Gothic altar of the original furnishings of the church that was preserved.

In the middle of the bas-relief is depicted scenę of the Assumption, background of gold. In the crowing, there is openwork canopy. Our Lady is surrounded by figures ofthe apostles. 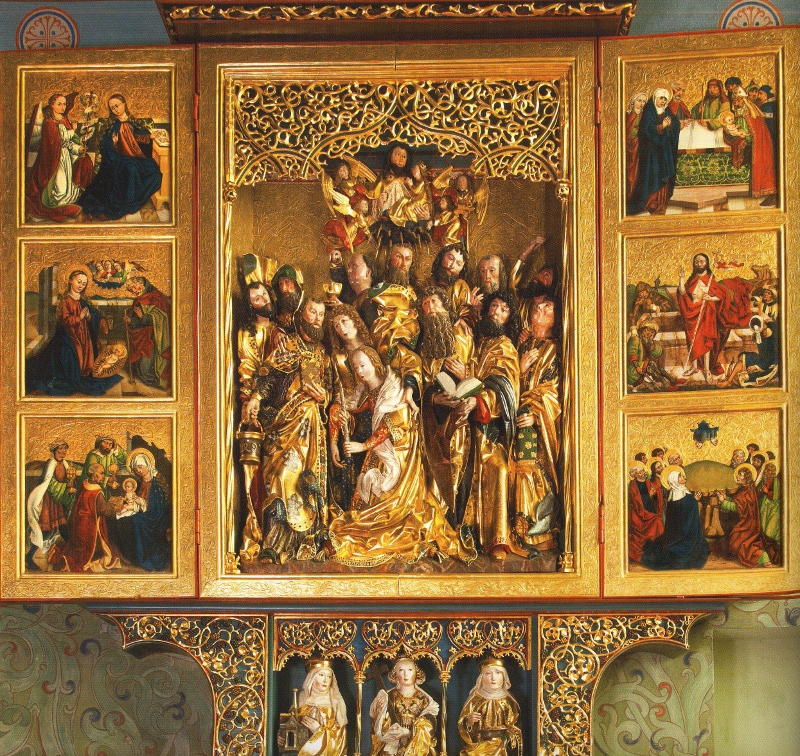 «Having fulfilled the course of her earthly life, Virgin Mary was to leave this world. At that point all the apostles from all cor-ners of the world, gathered in her home in Jerusalem in a won-derous way holding a vigil.»

The altar has four wings painted on both sides.

Each wing is divided horizontally into three obverse plaques and two reverse. That which scenę is displayed to the faithful depends on the period ofthe liturgical year.

The first display: the scenę of Christmas: obverse with gilded background, depicting: The Annunciation to the Virgin, the Na-tivity, Adoration of the Magi, The Presentation of Jesus in the Tempie, the Resurrection and the Ascension (7 plaques).

The second display, reverse painted with scenes of the Passion cycle on a golden background: Jesus’ prayer in the Garden of 01ives, The capture of Jesus, Jesus Before Pilate, Jesus scourging, crowning with thorns, Simon of Cyrene helps Jesus carry the cross, the Crucifixion of Jesus, Descent from the Cross (8 plaques).

The third display, a modest one, revealed on weekdays: painted figures of saints, depicted in pairs, background with-out gilding (4 plaąues): Holy Liborius bishop wearing a miter, holding the crosier and the book on which lie pebbles – a refer-ence to the fact that he healed the sick from kidney Stones; St. Erasmus, depicted with a ropę on the connecting rod, was a bishop and martyr. He is the patron saint interceding in cases of internal diseases; St. Sebastian shot with arrows, martyr, patron interceding during the plague; St. Roch, depicted with a wound on his thigh, protects during the plague; St. Macarius was the bishop of Jerusalem in the fourth cen-tury. He welcomes in Jerusalem Empress Helena, who found the relics of the Holy Cross; St. Jodok, patron of the poor, pil-grims, shelters and hospitals. He rejected worldly honors and power; St. Anthony the Abbot, a hermit here depicted with a pig, which refers to the medieval legend that every village devoted a one pig to a hospital, where St. Anthony monks acted their ministry. He is the patron saint of patients with skin diseases; St. Hu*mphrey with hair all over the body, depicted with a crown, holding the Host, as every Sunday, the angel of the Holy Communion comes to him. He spent 60 years in the wil-derness. He is the patron saint of pilgrims and weavers.

In the predella, there are busts of saints: St. Hedwig, pa-trones of Silesia, St. Helen, mother of emperor Constantine who discovered relicts of the Holy Cross and St. Elizabeth.
The wali of the chapel is decorated with paintings on can-vas, dating from 1697. They depict Prince Bolko II, founder of the church of St. Stanislaus and St. Wenceslaus and paintings presenting patron saints of the church, St. Stanislaus bishop and St. Wenceslaus.