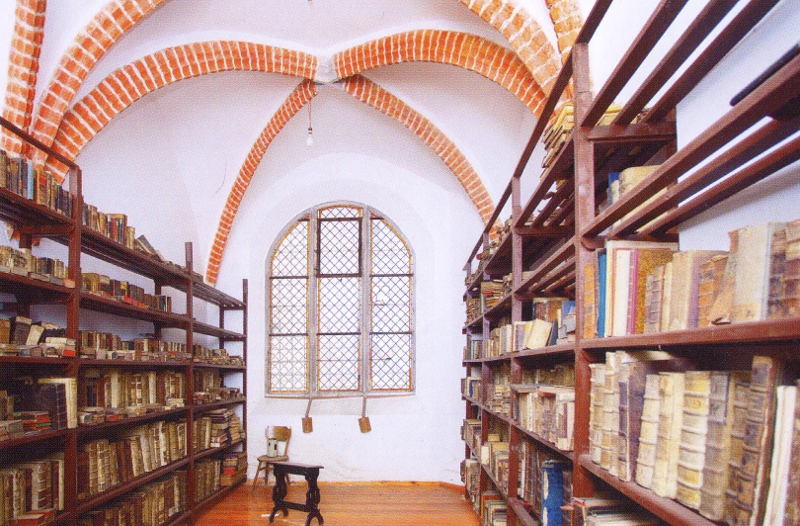 Before the Jesuits built a college with space for the library, the books were kept in the parish church.

The library is located on the north side of the Church of St. Stanislaus and St. Wenceslaus. The Gothic interior boasts a cross vault. Notę a Portal of sandstone with Gothic door dating from the 2nd half of the fifteenth century. The door is covered with sheet metal decorated with images of the Archangel Gabriel, Blessed Virgin Mary, Silesian eagle and the Czech lion. The Jesuits took good care of the eąuipment of the library and its de-cor. Books were stored in library racks divided by fields of study.

In Świdnica, Rector appointed the keeper of the library. Most of the library books were purchased, nevertheless, some were also passed on as a gift, or in a will. The book collection reveals valuable information about the Library. The place, time and manner of publication or books binding say a lot about the sources from which the books were obtained and the wealth of the buyer.

The libraries founded by Jesuits were open to public. The Jesuit Library in Świdnica served the monks in their mission-ary activity and pastorał education. Importance^f science and study were propagated as a way to earthly honors and self-im-provement. The Jesuits gathered books from various fields of science and divided them by fields of study: speculative theology practical theology, philosophy, church and civil law, history and political literaturę, astronomy, geography, medicine and science mathematics and natural sciences, rhetoric, literaturę, linguistics and epistemology. The books in the collection were published by the most important European publishers of that time. Jesuits cherished open access to European publications.

Jesuit publications about continents, so-called New World, were among the best and the most valuable. They were abundant sources of information about the Far East countries. In the field of Sinology Jesuits held the monopoly for 200 years. The Library boasts among its items three preserved letters of St. Francis Xa-vier, missionary of all time, active mainly in India and Japan.

Analysis of the contents of the books in the library reveals that majority of books are of religious type. Among the collection items are valuable manuscripts, including Albums of religious Brotherhoods. After the Council of Trent each library had the index of prohibited books: Index librorumprohibitorum. Hereti-cal books were stored in a separate closet.

The library collection currently counts about 2, 000 items, but only 1847 books are actually in Świdnica. There are 38 books of Polonica in Latin, 20 in French, 6 in Greek, 7 in Italian and 1 in English and Hebrew. The collection includes 14 post-Trent missals.