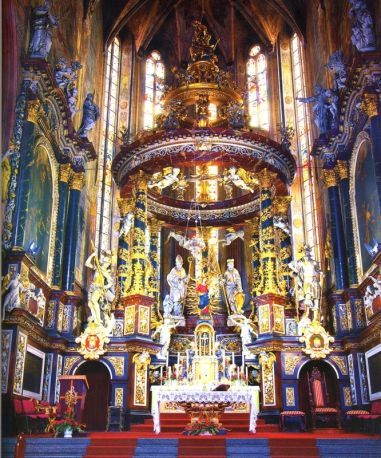 After the Council of Trent and its reformation of the Church’s l liturgy, the central role of the altar with tabernacle in its centre j was accentuated. The main altar was placed in the liturgical and j artistic centre of the shrine. It was to symbolize the throne of l Christ in a holy place, Sancta Sanctorum, the place where God| is present.

The altar was built on the circular plan. It is supported on l seven pillars and raised on high pedestal. The antependium decorated with bas-reliefs pictures the Lamb of God on the altar | of burnt sacrifice and symbols of Eucharist.

The altar refers to biblical citation from the Book of Prov-1 erbs, 9:1: “Wisdom hath builded her house, she hath hewn out her seven pillars (…)” (King James Yersion). Dark composite columns arę entwined with bands of gold rosę leaves. There l is a circular baldachin over the altar surmounted by an open-work dome. Baldachin was usually placed over the royal throne. In church, it serves symbolic role – it imbues the space below with transcendental meaning. The baldachins frieze depicts a pelican feeding the young as well as eagles with vine branches. Symbols of Eucharist.

The central part of the tabernacle depicts Yirgin Mary Cmeen of Heaven with baby Jesus. Notice symbol of the Holy Ghost over Jesus. The whole is surmounted by the figurę of God surrounded by little cherubim with attributes of the Holy Trinity.

On both sides of the chancel were placed plaąues with his-tory of the church. Over the plaąues, there arę paintings in archi-tectonic frames resembling an altar screen, flanked by columns with depictions of the “Martyrdom of Saint Vaclav” by Michael Willmann and the “Martyrdom of St. Stanislaus the Bishop by Jeremias Knechtel (1706). Above the paintings, there arę illusionist polychromes of J.G. Etgens depicting open sky wit angels holding attributes of saints as well as palms of victory and wreaths of eternal life. Ali with monumental architectur in the background.