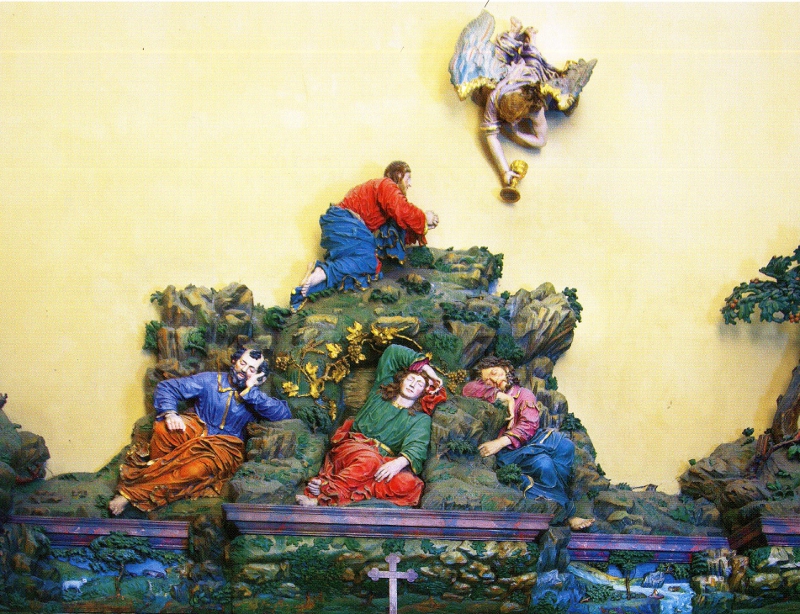 On the northern wali of the nave is a large-format sculptural composition madę by Johann Riedel SJ (1654-1736), depicting the scenę of Jesus’ prayer on the Mount of 01ives “And going a little farther, he fell on his face and prayed,’ My Father, if pos-sible, may this cup be taken from me! Yet not as I will, but as you will (…)” Mt 39.

Jesus took his disciples on the Mount of Olives to hołd vigilance with Him: Peter, James and John. But they fell asleep. He admonished them, “Watch and pray, that ye enter not into temptation; The spirit is willing, but the flesh is weak” Mk 14, 38.

Jesus praying on the Mount of 01ives is presented in robes with finely draped folds that seem to tremble with his body. He trembles from pain and fear from the approaching passion on the cross. An angel with the cup floats over Jesus, sym-bolizing God’s will. Jesus is here with his students, but they are asleep. They are presented in very natural poses of people fast asleep. In the lower part of the composition you can see a wolf lurking in the dark, waiting to kill a lamb – symbolizing Satan lurking to kill the soul. On the right, there is the brook Kidron which Jesus crossed when climbing with his disciples on the Mount of Olives.
Jesus invites the faithful to hołd vigilance with Him in the Garden of 01ives. He encourages people to follow the path of grace – the “precious pearl”. This kind of grace awakens in people the desire to sacrifice all they have to follow Christ. The suffering of Christ in the Garden of Gethsemane was the greatest when his disciples abandoned him. They were unable to stand by their Master even for an hour. Left in solitude Jesus decides to sacrifice his life for the redemption of mankind.

Jesus described his suffering experienced in the Garden of Gethsemane in a revelation to St. Margaret Alacoąue (1647-1690): “It was here that I suffered the most as I felt abandoned from heaven and by people – heavyhearted from all the sins of mankind.”