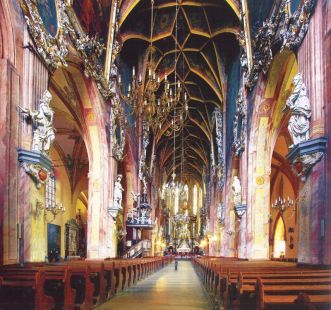 The nave is covered with a yaulted ceiling built by Lucas Schleierweber in 1535. It is 23.98 melers high. Only under the gallery, the vault is higher, reaching almost 26 meters. Jesuits built over the windows of the nave. In 1739, Johann Georg Etgens from Brno (1693-1757) decorated the wali of the nave with illusionist polychrome. Pillars of the nave arę flanked by the figures of the patrons of the churches at city gates. They arę work of George Leonhard Weber, sculptor from Świdnica. They datę from the years 1709-1710. Fach of the figures had a patron, except Saint Wolfgang. On the north side – Saint Barbara, Saint Martin, Saint Wolfgang, Saint Pe-ter. On the south side – Saint Margaret, Saint Laurence, Saint John the Baptist, Saint Nicolas, Saint Paul.