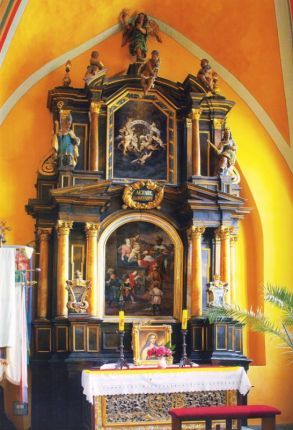 The Magi Chapel, founded by patrician Nikolaus Lowe in about 1395 on the south side of the church. Cross vault of the chapel dates from the fourteenth century.
The chapel boasts an architectural Magi altar, founded in the 4th quarter of the seventeenth century when Baroque design was introduced in the tempie by the Jesuits. The antependium of the altar is richly decorated with silver branches of acanthus and initials of the Magi «C M B». The reredos is decorated with the painting «The Adoration of the Magi». It is flanked by com-posite columns. The Adoration of the Magi has been depicted in traditional way: the first king to pay homage and gifts for Baby Jesus is the eldest king, who offers a golden cup to Jesus. The second king is painted black and he offers Jesus a cup of myrrh. The third one, the youngest King representing Asia, offers Jesus incense. In the crowning of the altar, there is a painting depicting open sky with angels and a scarf with the inscription «In excelsis Deo». Notę figures of St. Maternus (IV.), the patron saint of lavish growth of vines, an intercessor in fever and infectious diseases. Notę also St. Louis IX, king of France (1214-1270) bearing the scepter. The king was perceived as a model ruler. He organized Crusades. He brought to France the relics of Chrisbs crown of thorns. He was known for his piety, mercy and peace-loving.

The statuę of an angel with a trumpet, spreading the good news about the birth of the Lord surmounts the altar. In the cor-nices and pediment of the altar there is a putto holding gifts for baby Jesus: gold, incense and myrrh.