The Chapel of Seven Sacraments 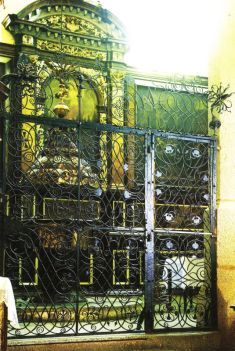 The chapel was founded by the guild of bath attendants in the fifteenth century. In the sixteenth century, the baptistery was placed there. The grating that separates the baptistery was madę by the blacksmith Andrils in 1591. After the takeover of the church by the Jesuits, the chapel received a new name and a rich equipment.
Renaissance baptismal font dates from the years 1585-1592 – from the times when the church was administered by the Evangelicals. It is madę of sandstone with alabaster (?) panels with biblical scenes fuli of symbols of baptism. It is an outstanding font that stands out among the Renaissance baptismal fonts in Silesia. It has a Dutch provenance. It is believed that it was madę by Fleiserem or Hans Friedrich Gross. Lavish ornamentation with rich symbolic and theological content cre-ates perfect setting for the liturgy of the sacrament of baptism. In the Baroque period, the Jesuits ordered a new decorative cover of the baptismal font. After the Trent, the place of baptism had to be separated with a balustradę or a grate.

Originally, the baptismal font was intended for the Church of Corpus Christi in Świdnica. Nevertheless, in 1680 the Jesuits moved it to the church of St Stanislaus and St. Wenceslaus.

Content program of the foot and body of the font have to be interpreted together. Baptismal font was “a testimony of water’ to the congregation. The font was decorated with scenes from the Old Testament and the New Testament that focused on the heal ing and sanctifying properties of the sacrament.

Most spectacular are the large paintings depicting the seven sacraments of the Catholic Church – the work of local artist Christian Kalitschky.

Notę centrally located reredos of portal type, modeled on the engravings from the Treaty A. Pozza. It has an inscription “FONTES Salvatoris” (SOURCE OF SALYATION). Above it you will find the carved image of a pelican feeding the young – symbol of Christ who nourishes the faithful with his own blood. In the central part is the painting of Christ the Saviour presented as Fons Vitae (Source of Life). Streams of blood flow from the wounds of Christ and fili the fountain. Seven streams run from the fountain just through the mouths of a lion. The Son of God is presented as the source of the sacraments and the Source of Salvation. The predella has an inscription of Chronogram “SEPTENA/ FIDEI NOSTRAE/ A CHRISTO/ SACRAMENTA/” (1703) (seven sacraments of our faith in Christ). The sacraments of the Church is the fruit of the redemptive sacrifice of Jesus on the cross.