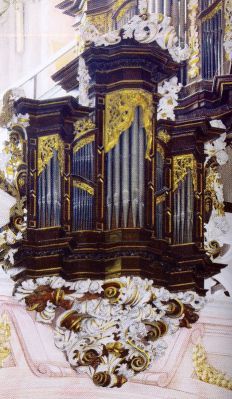 Above the organ gallery you will find a painting by J.G. Etgens (1693-1757) from Brno depicting patrons of the shrine. On the north and south wali are depicted angels playing on instruments and figures on the balconies, depicted against illusionist architecture with windows. These theatrical elements of interior decoration optically widen the gallery.

The liturgy in Jesuit churches attracted the faithful with rich musical setting as the Jesuits ordered exquisite organ instruments for their churches.

In 1705, a brand-new pipę organ was created, the work of organ-builder S. Sieber from Brno. The instrument boast-ed 45 voices and 4 bellows, spring wind chests, mechanical tracker of register and keyboards and Chorton pitch. S. Sieber applied uniąue solutions in the instruments design.

Sieber placed two symmetrical organ cases along the walls of the nave, on both sides of a large window. On the axis of the nave, centrally on the balustradę was placed the case of the posi-tiv. Ali parts of the instrument were connected by mechanical tracker. The swell-box was free-standing, centrally located on the axis of the organ gallery, closed with wooden shutters. Jesuits paid 10 000 crowns for the instrument.

Organ prospect is naturally illuminated by a large window of the western facade. A bipartite prospectus model was used here, which plays with the symbolic and decorative prin-ciples of light. This type of organ model was built for the first time in Świdnica. It was an innovative solution in the whole of the Jesuit Czech province. The design of the organ prospect was based on the graphic patterns taken from the Treaty A. Pozza. The Prospect has been built on concave-convex plan.

The side towers with curved cornices were put forward along the walls of the nave. They are supported by angelic atlases.

Sculptural decoration of the prospectus is the work of Georg Leonhard Weber (1670/1675) It was madę in the years 1704-1708 according to the design of Johann Riedel. Carpentry work was done by Zacharias Horka.

Prospectus is decorated with statues of angelic orchestra. The group of sculptures ineludes the figurę of King David and St. Cecilia. On the sides of the prospectus are the statues of Mary (pd) and the high priest Simeon with the Infant Jesus (pn). The image of a swan next to the figurę of the high priest Simeon is a reference to musie. When death of a swan looms ahead, he sings morę beautifully than ever. Simeon holding the Infant Jesus in his arms with great joy, praises the Lord for the grace of the birth of the Saviour.

During the Seven Years War (1756-1763) organ was serious-ly damaged. Renovation and maintenance works were per-formed by T. Koded of Lubawka in the year 1818. The instrument which can be currently found in the church of Świdnica is the work of Schlag & Sohne company and dates from 1908. The instrument was installed in the southern and northern parts of baroąue case. It has 46 voices, cone valve chest, pneumatic tracker of keyboards and register, folded bellows. The console was built-into the northern organ case (Fr. P. Dębski).